-our tribute to America's cup

Stenungsbaden | JC Stevens and the story of America’s cup

The story of America’s cup

- the villa is named after the founder of America’s Cup

The year is 1851 and the first international yacht race is taking place. The Hundred Guinea Cup took place off the south coast of England, The Isle of Wight. Here is the home to strong winds and dangerous outcrop. Out of the 15 competitors, 14 are British, leaving the last contender to New York businessman, John Cox Stevens. JC Stevens, skipper of the schooner America, wins comfortably by a clear 20 minutes. One of the spectators, Queen Victoria I, asks who the runner-up was and receives the famous reply: ”There is no second, your Majesty.” The crew and their skipper JC Stevens have made their mark in history. The yacht race has since continued and has been an eagerly anticipated event now christened America’s Cup. That phrase, ”There is no second, your Majesty.” is still to this day, the best description of the America’s Cup.

In 1992, here at our JC Stevens villa, a courageous bid was made on The America Cup prior to the match races in San Diego, California. The design engineers Jacob Vierö and Peter Norlin sat in the villa and designed Stenungsbaden Yacht Club’s challenging boat, Tre Kronor (Three Crowns). The gamble was unfortunately unsuccessful. Out of 21 match races only 3 were won. But the consolation prize – the most beautiful yacht in the competition – was won by Tre Kronor. The exclusive “J C Stevens” conference villa was formerly the office of the Swedish Americas Cup team in 1992.

Despite of the fact that the Swedes did not have the same resources as other teams, Stenungsbaden Yacht Club’s boat, Tre Kronor, put up a real challenge.

The “J C Stevens” villa is a tribute to John Cox Stevens, the commander who won the Hundred Guinea Cup in 1851 in the America. The various rooms in the house are named after different winners of the famous race. With its exclusive but comfortable elegance, this distinctive, nautical styled house is a very unique place to stay. Dinner is prepared by the house’s own chef, and the guests have the option to settle in front of the cosy hearth to enjoy the evening. When it is finally time to retire, each of the twelve rooms is comfortable and original, thus giving this villa a homey ambiance. 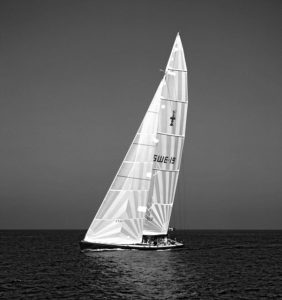